TEN SEED-GROUPS
ONE ORGANISM
THE NEW GROUP OF WORLD SERVERS

"These men and women of goodwill must be found and organized and thus discover their numerical potency - for it is there. They must form a world group, standing for right human relations and educating the public in the nature and power of goodwill. They will thus create a world public opinion which will be so forceful and so outspoken on the side of human welfare that leaders, statesmen, politicians, businessmen, and churchmen will be forced to listen and comply. Steadily and regularly, the general public must be taught an internationalism and a world unity which is based on simple goodwill and on cooperative interdependence." (Problems of Humanity, p. 178)

"Members of the new group of world servers and men and women of goodwill must be sought for in every department of life. They will be found among the adherents of all the current ideologies and in political and scientific circles, among the world educators and philanthropists, among the creative workers, the industrialists, in ordinary homes and in the ranks of labour. I (Master D.K.) call on all the men and women of goodwill in the world to study the principles of the new world order. I call upon them, as they fight for justice and the rights of the little nations and the future of the children of all nations, to begin to educate those whom they can reach , in right attitudes and in that foresighted vision which make the mistakes of the past impossible in the future." (Externalisation of the Hierarchy, p. 204-207)

"The New Group of World Servers is not a new organization which is forming in the world. It is simply a loose linking together of all men of constructive peace aims and goodwill who lay the emphasis upon the prior need of establishing right human relations before any lasting peace is possible. This group in no way interferes with the allegiance and loyalties of any man. It Is a banding together of all who seek to express the spirit of Christ and who are free from the spirit of hatred and revenge. The challenge of this group to the world is to drop all antagonisms and antipathies, all hatred and racial differences, and attempt to live in terms of the one family, the one life, and the one humanity." (Externalisation of the Hierarchy, p. 205)

THE NEW GROUP OF WORLD SERVERS 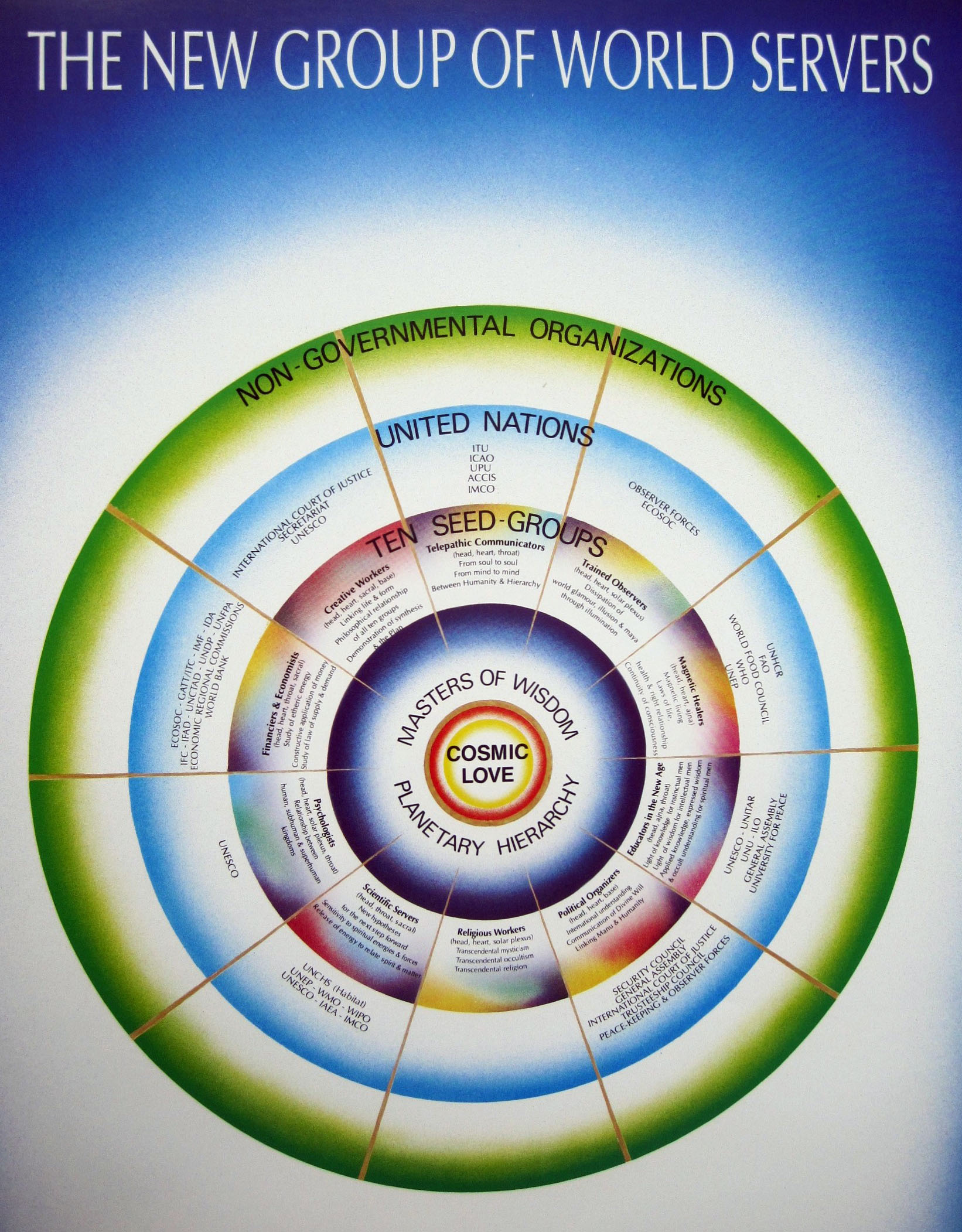 This poster and accompanying handbook represent a first step in an attempt by IPS co-workers to present in an accessible manner the work of the ten seed-groups, both in relation to the inner world, the Spiritual Hierarchy, and to the outer world, humanity at large, represented by its collective institutions, the United Nations and the Nongovernmental Organizations. Both the poster and the handbook represent therefore only a stage in an evolving understanding of the ten seed-group structure, which could become a basis for the future world civilization, characterized by constructive cooperation and right human relations in all circumstances. The text of this handbook has been partially gathered from books by Alice A. Bailey - dictated by Master Djwhal Khul, and can be downloaded from the Publications page. The colour poster is available in English, French, German, Russian and Spanish.

The activities of your organisation correspond to one of the fields of service listed in the 10 Seed-Group Directory? Then register for free!