The Institute for Planetary Synthesis is an NGO in consultative status with the Economic and Social Council of the United Nations (ECOSOC) and was founded in 1981 in Geneva. It aims at reawakening an awareness of spiritual values in daily life and promoting planetary awareness, leading to planetary citizenship based on the spiritual values: love of truth, personal responsibility, sense of justice, constructive co-operation and selfless service of the greater whole. The Institute works to make known the 10 seed-group structure, the 10 fields of service*, as a possible basis for the future world culture and civilisation. ​

Purpose:
After the two meetings on 20 June and 12 July, we will meet again to discuss the next steps ahead.

All the documents gathered until now explaining the self-financing World Marshall Plan and the concept of a basic income for all can be downloaded from the following folder on Google Drive:

A new document, Lobby Geneva 2006.doc, has been added. It describes the lobbying which was done for the World Marshall Plan at the UN in Geneva in 2006 by Lisinka Ulatowska.

You may also watch the video with Pieter Kooistra (30') at:

Elly Pradervand and her colleague Deborah have designed a logo to represent the project. It is reproduced below. 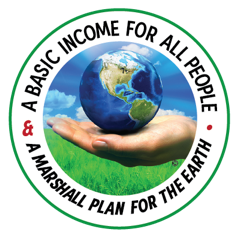 As decided during the General Assembly, we will meet once a month for a group meditation and sharing on planetary synthesis and service activities.

The first meeting took place on Sunday, 7th June, at 2 PM CET, 12 PM (noon) GMT, 9 AM Brazil time and will be repeated every first Sunday of the month.

The next meetings in 2020 will be on the following Sundays:

Here is a short summary of the meeting on 7th June.

Rudolf Schneider guided the meditation on planetary synthesis, adding the Golden Rule as a seed-thought. We then shared ideas about various service activities for the welfare of humanity and the planet. Here is a short overview, arranged according to the fields of service of the 10 seed-groups.

Susana Acle told us about a group meditation for the dissipation of glamour in which she participates with a group in Brazil and Bolivia. The meditation is available in Spanish and Portuguese (seed-group 2: trained observers).

Marjolijn Snippe told us about the initiative https://oneshared.world/, which proposes a "Pledge of Interdependence" which anyone can sign on their website (seed-group 5: political organizers).

Rudolf mentioned that we should promote the teaching of English for all children of the world, to allow everybody to communicate in a common language (seed-group 4: educators).

Jennifer Viloria mentioned an initiative she has started in the U.K., together with others, aimed at enabling people to invest their capital in a way that is beneficial for the poor and for the environment (seed-group 9: economists and financiers).

Nikita Dubrova talked about the possibility of using bitcoin mining equipment to generate heat for homes and to help finance the World Marshall plan designed by Pieter Kooistra (seed-groups 7 and 9: scientific servers, economists and financiers). He also stated that he thinks the 18th Sustainable Development Goal should address the issue of artificial intelligence.

Lisinka Ulatowska mentioned that the Commons Cluster is just starting a new phase and that they will be glad to have the participation of those who are interested. The Commons Cluster has a mailing list, on which you can request to be put by writing to Taede Veenstra (taedev at gmail.com) (seed-group 5: political organisers).

Another decision taken was to invite all IPS friends and co-workers to participate in these meditations on the first Sunday of the month. An invitation will be sent to our entire mailing list and the meetings will be announced on the IPS website.

The meetings will continue to be held in English, but if any participants finds it difficult to speak in English, Alice can help with translation from French, German, Portuguese or Spanish.

Transforming Our World in Harmony with Nature

TRANSFORMING OUR WORLD IN HARMONY WITH NATURE, INTEGRATING NATURE INTO THE IMPLEMENTATION OF THE SDGS

Nature is fundamental to the Economy and Society, the other two dimensions of sustainable development: It provides the resources that fuel the economy and human life itself. Moreover, while we, human beings, create our societies and economies, we are an integral part of Nature. We consist by virtue of the air we breathe, the water and biodiversity that nourishes us and our life energy: We are an integral part of Nature. Living in harmony with Nature requires not a human but a Nature-centric intuitive, approach.

After the two years during which the SDGs were being developed it became clear that social and economic concerns were being dealt with more urgently than our rapidly deteriorating relationship with Nature and thereby human beings were transgressing Nature's planetary boundaries necessary for human life.

The Partnership on the Rights of Nature. Integrating Nature into the Implementation of the SDGs, of which the IPS was a founding member, consisting of academics, indigenous peoples, civil society organizations and Nature communicators undertook as a part of the UN's Partnership Exchange to write reports, based on input from around the world, whereby a Nature-centric approach would be applied to all of the SDGs and almost all of the targets. They both completed these reports, and brought them together in this trilogy, arranged according to the SDGs that were the focus of discussions at the High Level Political Forums in 2016, 2017 and 2018, respectively. These are teaching manuals, reference works, and guides for government ministries, whch can be used as follows:

1. To get insight into what constitutes a Nature-centric approach, read the Executive Summaries of the books that contain the goals that interest you most; and then read the Introductions and Conclusions to each of the 9 chapters in Part Two of the first book, mentioned below. This book was written last and contains most diverse features.

2. To get ideas about how a Nature-centric approach can be applied to any of the SDGs or targets, just consult the relevant report. These are mentioned beside the appropriate link.

3. If you are part of a government ministry or a civil society organization, check the chapter(s) in Part Two of each of the three books for “Means of Implementing” those SDGs that relate to focus of your work (SDG 17. Means of Implementation.)

Here are the links:

Declaration on the Right to Peace

We are glad to announce that on Monday 19 December the plenary of the General Assembly adopted the Declaration on the Right to Peace by majority of its Member States in resolution A/RES/71/189.

A detailed article on the Declaration, written by David Fernandez Puyana, was published in Elaph, a leading independent newspaper for the whole Arab region.

Unless indicated otherwise, these events are not organised by the IPS.
For further details, please contact the organiser of each activity at the address given.